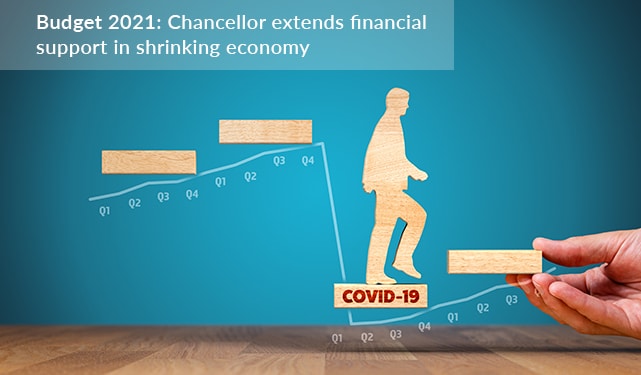 Budget: Chancellor extends financial support in shrinking economy Rishi Sunak has announced that some important coronavirus support measures will be extended until September.

Rishi Sunak has announced that some important coronavirus support measures will be extended until September.

The Chancellor also said that the economy shrank by 10% last year and that some tax changes would be needed to help rebalance the public finances.

Coronavirus lifelines like the furlough scheme and the £20 Universal Credit top up have been extended by another six months. The self-employed income support scheme has also been extended until September and an additional 600,000 people will qualify for this scheme.

The Chancellor also announced some benefits for people in work. Minimum wage will increase to £8.91 from April and Working Tax Credit claimants will receive a one-off payment of £500.

State of the economy

As part of the budget, the Chancellor delivers an update on the state of the economy and public finances. Sunak revealed that the economy shrank by 10% last year, but is forecast to rebound in 2021 – with a predicted annual growth of 4%.

Economists believe that the economy will return to pre-Covid levels by the middle of 2022, with growth of 7.3% next year. It was also revealed that 700,000 people lost their jobs since the pandemic began. Unemployment is expected to peak next year at 6.5%, but this is lower than the 11.9% predicted previously.

To help rebalance the economy after high borrowing, the Chancellor also announced a range of tax changes. Although the rate of income tax will not change, the Chancellor announced that the tax free personal allowance and the higher rate income tax threshold would be frozen at 2021 levels until 2026. This means that more people will pay these rates.

Tom Fox, Licensed Insolvency Practitioner at Umbrella Insolvency said: “This seems to be a sensible budget plan from the chancellor. Crucially, the furlough scheme and Universal Credit top-up provide a lifeline for individuals at the sharp end of the coronavirus crisis.

“Tax increases were always going to happen and hopefully they won’t strangle a fragile recovery.”

If you are struggling with problem debt as a result of the coronavirus pandemic, speak to a member of the Umbrella.UK Insolvency team today. Call: 0800 611 8888.