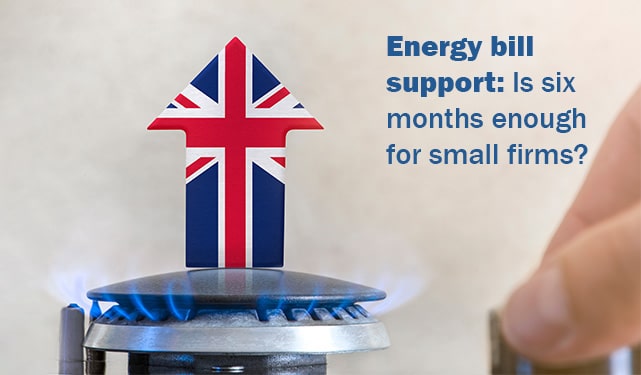 Rising energy prices have been a source of concern for individuals and businesses in recent months, with some firms reporting predicted price increases of 500%.

To ease the burden on household budgets and protect businesses from insolvency, the new Prime Minister Liz Truss last week announced a limit on bills for domestic and business energy customers.

A typical household, who were expected to pay around £3,500 per year for energy from October, will pay no more than £2,500 per year over the next two years.

Businesses of all sizes will get ‘equivalent’ support, but most will see prices frozen for six months.

Truss indicated firms in ‘vulnerable sectors’ would get support beyond six months and this would be reviewed after three months. But some small firms are questioning whether this support will be enough to continue in the long run.

What happens when support disappears?

National Chair of the Federation of Small Businesses (FSB) Martin McTague said the support was a ‘huge relief’ for millions of small businesses, but expressed concern about what would happen when it comes to an end.

He said: “This must not result in a cliff-edge after six months, with the withdrawal of support to all but ‘vulnerable’ targeted industries, sectors or types of business. The definition of who falls in and out of that support will need to be looked at carefully at the three-month review.”

What is a ‘vulnerable sector’?

Liz Truss said that companies in ‘vulnerable sectors’ could get some additional support after six months, but she only offered hints at who would receive further support.

Addressing the commons, Truss said: “We will provide further support to vulnerable sectors, such as hospitality, including our local pubs.”

Companies operating in energy-intensive industries like food, pulp and paper, metal and steel, concrete and chemicals are already lobbying for additional support, but it is not clear whether this will be forthcoming.

Truss added that she would work with her new Business Secretary Jacob Rees-Mogg to target additional support where it is most needed.

What happens if a business has already fixed its costs?

In recent months, many businesses have already entered into fixed price contracts at high prices. In many cases, these contracts will be higher than the price cap set for households.

At this stage it is unclear what will happen to these contracts. The government has said the support for businesses will be “equivalent” to the deal offered to domestic customers, but hasn’t clarified what this means.

The Department for Business is expected to provide more details this week.

Tom Fox, Licensed Insolvency Practitioner at Umbrella Insolvency, said: “Without this support, we could be facing huge numbers of insolvencies in all kinds of industries this winter. So six months of support will be most welcome for firms.

“What happens after six months? Time will tell. There is a chance that energy costs will come down in the same way that fuel costs have reduced in recent weeks, but that’s difficult to predict at this time. And with other costs besides energy also going up, the future is by no means assured for millions of small firms in the UK.”

For more information or advice about business finances, speak to a member of the Umbrella.UK Insolvency team today. Call: 0800 611 8888.