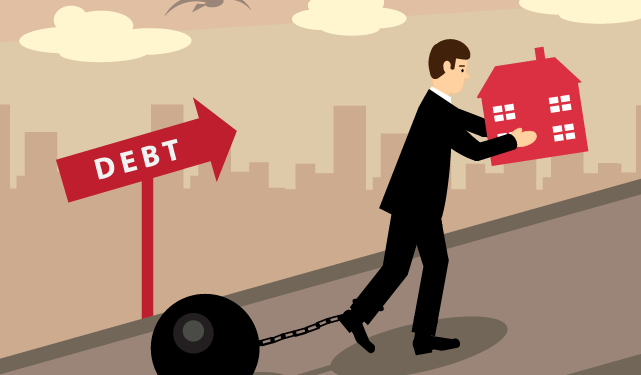 Debt charity polling reveals that twice as many Brits believe that their financial situation will get worse, rather than better, over the next 12 months.

Big increases in mortgage costs and other expenses will hit families hard if interest rates rise.

A new study indicates that British households will spend almost a third more on their mortgages and other household debts over the next five years.

Rising costs will be driven by an increase in interest rates, which could rise as soon as May.

The Guardian reported on a Freedom of Information request lodged with the Office for Budget Responsibility.

The request revealed that the cost of servicing household debt was set to rise 29% by 2023. The vast majority of this increase is likely to be increased mortgage costs.

There are concerns that the increase will take homeowners by surprise, because costs have fallen by 9% over the last five years.

Historically low interest rates also caused debt costs to fall as a share of household income by a quarter.

The Bank of England has indicated that it could raise interest rates from their low of 0.5% as early as May.

The debt charity the Resolution Foundation has warned that rising interest rates could hit low-income families who have relied on cheap credit.

The Guardian quoted Andrew Hood, a research economist at the Institute for Fiscal Studies, saying that wealthier homeowners would feel more of the burden.

“The vast majority of household debt is mortgages and interest rates are widely predicted to rise over the next five years, so we shouldn’t be too surprised to see the projected debt servicing costs rising,” he said.

“Much of the cost will be borne by richer homeowners who have large mortgages and the aggregate figures don’t tell us much about other kinds of household debts such as credit card debt or rent-to-own loans.”

The Bank of England appears more relaxed about the increase in interest rates, citing expected increases in pay.

Average salaries are expected to grow above inflation at a rate of 3.1% this year compared with 2.6% in 2017.

If you are struggling with problem debts, Umbrella Accountants can help you reduce repayments and bring down your total debt. Speak to one of our debt advisers today to learn more about your options. Call: 0800 611 8888.