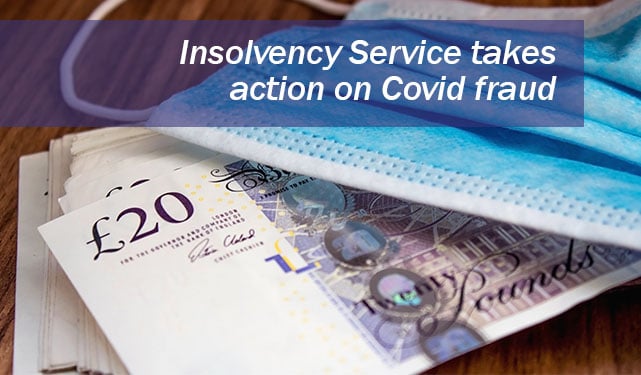 The Insolvency Service is clamping down on Covid fraud and handing out director bans to business owners that abused Covid-19 support schemes and went into liquidation.

The directors names in recent enforcement action include a Manchester takeaway boss, a ‘bargain basement’ shop owner and a consultancy director.

41-year-old Ifraz Nabi was disqualified as a director for 7 years after his chicken takeaway shop wrongly claimed £30,000 through the government’s Eat Out to Help Out scheme and over £20,000 through the furlough scheme.

The Insolvency Service also imposed a director ban on Mineef Ihsan, 26 from Rotherham, who was the director of three companies between 2019 and 2020.

After an investigation, the Insolvency Service found that Muneef Ihsan opened a bank account for each company after the pandemic began and obtained three £50,000 Covid-19 Bounce Back Loans.

As there was no evidence that any of the companies had ever traded, they weren’t eligible for the loans, which were made available for genuine firms that were struggling during lockdown.

44-year-old Richard Milne was the director of Langshot Ltd, a small consultancy that applied for a £30,000 Bounce Back Loan in May 2020.

Milne was banned for eight years after an investigation showed that the maximum the company was eligible to claim under the Bounce Back Loan scheme was under £13,000. The investigation also found that Milne spent nearly £8,000 on personal expenditure, breaching the terms of the loan, which was only to be used for legitimate business reasons.

All three directors were banned after their companies entered liquidation. The Insolvency Service always investigates cases where a company is put into compulsory liquidation. It can also investigate other insolvency cases with suspicious circumstances.

The Insolvency Service has powers to disqualify business directors and, if necessary, wind up a company.

A director disqualification prevents an individual from directly or indirectly becoming involved int he promotion, formation or management of a company, without the permission of the court.

If it seems that a company or its officers may have committed criminal offences, the case may be referred to the Insolvency Service’s Criminal Investigation Team.

Is your business struggling with financial hardship? Speak to one of our advisers for free, confidential advice. Call Umbrella.UK Insolvency: 0800 611 8888.