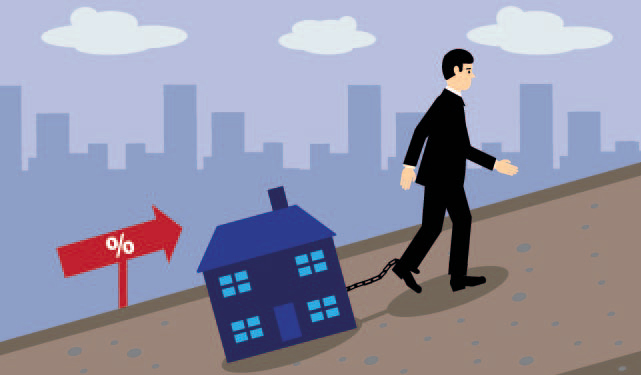 The Bank of England’s monetary policy committee has voted in favour of increasing their base interest rate from 0.25% to 0.5%.

It is the first rate rise in over a decade and is intended to bring living costs under control, but many in debt including homeowners could see their annual debt costs increase by hundreds of pounds.

‘A hammer blow for those in problem debt’

The base rate change is applied straight away, but it won’t have an immediate impact on individuals and businesses.

A group of homeowners who will feel the pinch before most is those on a tracker or variable rate mortgage. An average homebuyer with a mortgage of £175,000 will see their monthly repayment increase by around £22 a month.

Although this may not sound like a lot, many economists expect more gradual increases with some forecasting a new long term ‘normal’ of around 3% in a few years’ time.

These kind of increases could lead to some homeowners spending 1,000s more each year.

These rate increases will be particularly damaging to some less well-off families. Earlier this year the Financial Conduct Authority (FCA) found that one in six (17%) Brits think they would struggle if their monthly expenses increased by less than £50.

Today’s hike is a hammer blow for those in problem debt, whose repayments will now rise.”

In a press conference, the Bank of England Governor Mark Carney said that UK households are well placed to handle increased costs, in part because 60% of mortgage holders were on fixed interest rates rather than variable ones.

This is true. Only about 40% of mortgage holders are on variable deals, but homeowners on fixed price mortgages will not be immune from the increases.

Most people on fixed price mortgage deals are on short term contracts, with many likely to end within two years. This means that although these borrowers will see little immediate impact, they could see more significant increases in the future.

In part, the Bank of England’s decision to increase rates was taken to curb the UK’s mounting pile of consumer debt.

Consumer credit has grown 10% in the last year, an increase not matched for pace since the economic downturn. The Bank of England has issued repeated warnings about ‘pockets of risk’ in the economy for those consumed by serious debt problems.

But this policy doesn’t help those who are already struggling with debt problems and it doesn’t take account of Britons who are resorting to credit to pay for essentials like food and fuel. These low-income families will be among the hardest hit by the rate increase.

Again, affected families may not notice an immediate impact, but serious debt problems can build up over time.

And these problems can be compounded by trends such as restrictions on welfare payments and macroeconomic shocks, such as the financial fallout from Britain’s decision to leave the EU.

Manage your debts without losing your home

Nobody wants to lose their home. But when you are staring down the barrel of unaffordable unsecured debts and your mortgage costs are going up, selling up may feel like the only option.

If you have credit card and personal loan debts that seem impossible to pay off, then an Individual Voluntary Arrangement (IVA) can help you break free from the debt cycle.

An IVA gives you more control of your assets than bankruptcy.

Although at the end of the arrangement, you may have to remortgage your home to release some equity. But you will not be expected to sell your home and with most IVAs there are limits on how much you will be expected to raise.

For more information about IVAs and other debt management solutions, speak to a member of our debt advice team today. Call: 0800 611 8888.