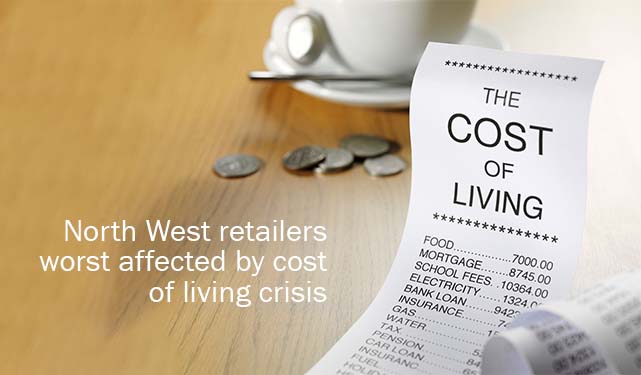 Major retailers headquartered in North West England are among the worst affected by the cost of living crisis, according to new research by Manchester-based investment group AJ Bell.

Handforth based Pets at Home was the worst affected North West retailer. The pet shop group has seen 35% wiped off its share value since January 1.

Figures from the Office for National Statistics (ONS) show that retail sales fell by 1.4% in March. This follows a 0.5% contraction in February and a 0.3% contraction in January.

Online retailers look to be the worst affected, with online sales plummeting 7.9% in March.

Speaking to Business Desk North West, AJ Bell Investment Director Russ Mould said: “When energy bills are shooting up, it costs considerably more to fill up your car with petrol and buying essentials like a loaf of bread and a pint of milk has become more expensive, it’s no wonder that retail sales have plunged.”

He added: “The share price movements tell you what the market thinks about the consumer spending outlook. It’s easy to cut back on items like greetings cards and clothes, as evidenced by big declines in the shares of Moonpig and Marks & Spencer.

“But the one company that stands out from the crowd is B&M European Value which is down nearly 18% year to date.

“One might have thought cash-strapped consumers looking to save money would trade down to cheaper items which would benefit value retailer B&M, but the stock market clearly disagrees.”

Tom Fox, Licensed Insolvency Practitioner at Umbrella Insolvency, said: “This should be a warning for all retailers. While sales may not be suffering massively just yet, it’s likely that consumers will reign in their spending more over the next few months.

“Big ticket items like holidays and sofas are typically the worst affected when consumer confidence is low. But B&M’s stock market fall indicates that no-ones immune.”

The FTSE 350 Retail price changes tracked by AJ Bell since January 1 2022 are:

Umbrella Insolvency helps businesses that are struggling financially. For more information about company insolvency services, speak to a member of the team today. Call: 0800 611 8888.